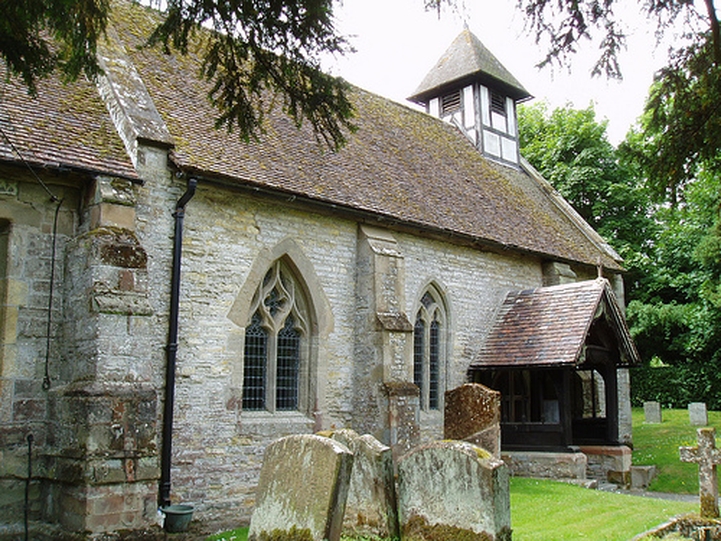 St. James’ church was once a chapelry to St. Helen’s church in Worcester, Huddington was held by the Commandery, Worcester, until it passed to the Wintour family. The Wintours came to Huddington when Roger Wintour married the wealthy Joan Hodington in the15th century, and it belonged to the Wintours until 1658. The Wintour family were prominent recusant Catholics at the Reformation, and two brothers Thomas and Robert were executed for their role in the Gunpowder Plot.

The nave and south aisle are of lias, whilst the chancel is of sandstone. There is a timber porch and small bell turret. By the late 19th century the church was on the verge of collapse, and in 1900 it was restored in an Arts and Crafts manner by Charles Ford Whitcombe, the architect of Broadheath church and the vestry at Himbleton church. The nave is Norman and has one lancet at the west end of the north wall. The small plain Norman south doorway has been reset in the rebuilt wall, and the l5th century north doorway seems to incorporate a former Norman inner arch.

One north window has simple cusped tracery of about 1300, whilst the second window is a later replacement. The south aisle was probably built as a chantry for the Hodington family, but by 1900 only the eastern part survived and was treated as a transept. Ford Whitcombe rebuilt the west end. The windows reflect this story, with a Decorated east window and simple windows to the south and west. The Perpendicular chancel dates from the rebuilding of 1535 by Roger and Elizabeth Wintour. There are square headed side windows, whilst the east window has stepped lights with tracery above. To the south is a blocked priest’s door. The north porch is a beautiful Perpendicular timber structure, very similar to the porches at nearby Crowle and Himbleton.

The interior was scraped to the stone at the restoration of 1900, but maintains a powerful atmosphere.

The aisle is divided from the nave by a two bay Decorated arcade, with rich mouldings to the piers, capitals and arches. The chancel arch dates from the 1535 rebuilding, and there are 16th century wagon roofs in the nave and chancel. In the chancel, there are canopied image niches to each side of the east window, with blank stone shields above, which perhaps once carried the arms of Wintour and Cokesey – the Wintours had inherited great wealth from the Cokesey family, and their emblems appear elsewhere in the church. In the south wall there are a damaged piscina and an aumbry. It is possible that parts of the medieval screen were reused in the chancel panelling, as it contains 14th century style trefoil openings, which seem once to have served as squints. The panelling formed part of box pews in the 17th century. There are mortice holes marking the position of the medieval parclose screen in the arcade, but the chancel screen is 17th century with balusters, and along with the communion rail probably dates from the time of Archbishop Laud. Some of the chancel stalls have linenfold panelling of about 1520, whilst others are 20th century. In the aisle are a 17th-century communion table, and the Royal Arms of George lll. The carved Last Supper is from a former 19th century reredos. Set in the west wall are 15th century tiles, including some with the arms of the Wintour family, and others with parts of a design which may have made up a large cross. The plain octagonal font is 14th century. Nearby are commandment and benefaction boards.

The south aisle windows contain many medieval fragments of glass, including arms of the Wintour and Cokesey families. The tracery of the chancel side windows has 16th century glass with the initials of the founders, R and E, and the rebus of the Cokesey family, a cook’s table on a boat. The east window contains several pieces of 16th century glass which make up figures of the Virgin and St. John with a Crucitixion. These appear to be either Cornish or European glass and were installed in 1933.

In the chancel is a brass with a Latin inscription to Adrian Fortescue, who died in 1653. Plain rectangular brass plates commemorate Frances Wintour, formerly Talbot, who died in 1641, Mary Wintour,formerly Carrington, who died in 1642, successively wives of George Wintour who died in 1658. George Wintour is also commemorated with his third wife, Mary Kemp, by a black and white marble tablet in the aisle. As his only daughter predeceased him, George was the last of the Wintours at Huddington, and the estate passed to the family of his first wife, Frances Talbot - the Earls of Shrewsbury.

Outside a Mass dial is scratched on the east wall, and the former south door has medieval metalwork.

By the lychgate a crucifix in wood and bronze marks the site of a grave discovered in the early 20th century. It contained a man’s body together with coins of Charles 1. He is thought to have been a Royalist soldier who fled from the defeat at the Battle of Worcester in 1651.